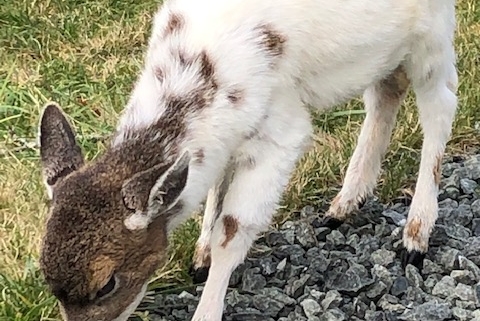 My tears fall like glass. They pile up and cut me. I flounder through them as they slash my flesh. The warm healing water has not yet arrived. My tears are not a salve. They do not soothe. I ache. I ache for a perfect little being who died a painful death. I ache for missing him.

Stumpy, tiny dwarf deer, a gift. I loved to sit outside with him while he ate. I notice the sky, listen to the birds. He helped me slow down and get into the moment. He made me sit and be.

My friend. I spent time with him daily. He would visit several times a day to see what treat I had for him. I loved feeling his soft lips picking up chopped carrots and apples from my palm. I loved running my hand under his jaw, where he would let me touch him. I loved watching him, with his head lifted high as he listened to something in the distance. His face alert as he raised his head from his bowl and stopped chewing to better hear. He would check out a raccoon, walk up to it, curious. Or watch an ant. I sit with him and admire his black cloven hooves, his little white bottom teeth, his long eyelashes, his intelligent eyes. I once picked his foot up out of his food bowl, and he looked at me with utter disbelief. My audacity.

I first met him last fall with his mother, who has since been named MamaMama. She is a piebald deer, brown and white, due to inbreeding I believe. Stumpy was a tiny, round, mostly white baby deer, a unicorn fawn, trying to get his teeth into the apples that had fallen under the two old King apple trees.

Sometime in the winter, I started bringing him a little food. I had seen another dwarf deer sicken and die, one to who I had offered food after it was too late. I wanted to do my best to help this one survive. At first, his mother would bring him to me. Later, he came on his own, often with his mother following. Watch Stumpy during a cold snap.

It is frowned upon to feed the deer here. We live on a small island and there are no predators. The deer population has grown and impacted the flora, changed the understory, drastically diminished certain plant species that others, insects, and birds, also rely on and call their home. I understand this. I also do not want an increase in the deer population. I see the damage caused by an out-of-balance ecosystem. And yet, I live in a larger world than one plus one equals two. Sometimes the heart dictates more than logic. Sometimes we are called to a relationship that others may not see nor approve of. I did not leave food out for the herd. Stumpy and his mother were at that time, the only lucky recipients.

We had a cold snap one week last February. I fed Stumpy, looked at his pink skin, raw from moisture and cold, peeking through the fur on his legs. Carrots and apples and kale. A grain mix. That is what I brought to him. Always happy to see me, he would come trotting over to see what I had. When he was finished, off he would go. Free and unencumbered.

Soon it was spring. The daffodils were blooming and then the cherries and plums. Stumpy began to grow. He was still short; he had not gained any height. But his body began to lengthen. My husband and I would sit on the deck and give him a treat and watch him. Unlike the other deer grazing on the grass nearby, he would often leap and run for joy. I felt his happiness; it moved through me.

Sometimes I would go visit him in the field, sit next to him as he lay in the grass, taking in the sun. Give him a treat. Admire his beautiful black hooves, his long black eyelashes. Hang out with him. Take a moment from my busy life. Breathe in deep, notice his world, our world. A world that we often don’t focus on. The peace of the reaching bodies of trees. The movement of the wind enlivening the air. The sounds of other beings.

One June day, a Friday, Stumpy wasn’t quite right. I didn’t realize he was sick. I noticed that his hind legs seemed to shake for a moment. Saturday, he only ate in the morning, a bit of apple and grain. He rested a lot and would not eat the cilantro from the garden that I brought him later. He didn’t want the grain mix I offered him that night. Sunday morning, he did not come up to the house but was lying down near the apple trees. I went to him and picked him a favorite – some apple leaves. And a bit of broccoli leaves from the garden. Not a substantial meal. I did not see him for the rest of the day. I began to worry.

Later it began to rain. Towards evening, as it was darkening, I looked for him in the rain. I called him. He did not come. Perhaps he was on a journey and hadn’t gotten back yet. But our property is his home. He was always nearby. I saw MamaMama and GrandmaGrandma. No Stumpy. Something wasn’t right. I was beginning to feel frantic. Back inside, I kept looking out the window for him. He did not show up. Old traumas, ghosts of other losses lurked around me. Childhood pains of animals and pets I could not save. The doer in me chopped off at the knees.  The pain of others that I feel as strongly as my own.

Monday morning, he was not waiting for me. Our property felt empty. I could not feel his presence, only his absence. I knew for sure that something was wrong.

That afternoon I went looking. Serious looking. I intended to find him. I leashed the dogs and went out. Off in the distance, at the edge of our property, where the woods met the field, just a short distance from where I had looked the previous night, I saw a patch of bright white. I frantically tied the dogs and ran. Was it him? Could he still be alive?

He lay there stretched out, beautiful, on the soft green grass, like he was resting. I reached down and touched him. He was stiff, not warm. I ran my hand over his white, white fur with brown spots. My dear little Stumpy. His neck arched back, I could see the agony of his final pose, despite the gentle laying out of his body. His mouth clenched some blades of grass, his tongue extended. He must have struggled with pain.

I went home for the wheelbarrow and to put the dogs in the house and returned. I lifted his body and gently put him in it and brought him home.

After I said goodbye,  after I told him I loved him. After I explained how beautiful he was, how much I already missed him. After Mike said goodbye. Then I wheeled him to a dip on our property. Placed him, arranged him. It took the shovel and covered his snow-white fur, his little brown spots, his black nose, his legs and torso and neck, and head and ears. I covered him with rich dark brown dirt. I found a rock and placed it where his heart would be. I cry and cry. I feel broken. I do not know how I will recover from this.

I did not think this gift, the gift of his presence would be so short-lived. I didn’t think he would die so soon; he was maybe one year old or a little less, just a little boy. No older than that. But joyful, leaping, and exploring. I imagined our relationship off into the years. I had plans for us, for shelter for him in the winter, for someone to feed him if I had to travel. I imagined him part of my life for a long time.

I had just gone to the hardware store for food for him. I was concerned because of a virus that was killing the deer here. I wanted him to have enough food. I wanted to make sure he was healthy. The virus did not kill him. He did not have those symptoms. We think he got into poison somebody put out to kill something else. We do not know. If he ate food with the poison, he would not have seen the trick, the subversive, the evil. He would not know his death would take days, that he would be in great pain

After he died, I felt haunted. I knew something wasn’t right. I did a visualization, a prayer, a moving of energy, a shifting into the light, into love for him. With the help of another who sees, we sent his spirit love and healing. We helped soothe his trauma, the pain, and suffering that he experienced in his last days, and for a death that was not expected, a life cut short.

He didn’t want to die. He was full of joy and leaped and jumped and celebrated his life in a way I had never witnessed a deer do before. I think he was surprised to leave so soon. I think he wants to come back. I think he will.

Innocent and young, he thought it was heaven here. He did not know what could happen. He was unafraid and curious. He loved eating yellow rose petals the best. He snatched each petal, gobbled it down. Followed by the apple leaves, I picked off the old apple trees for him. I ache for his loss. His leaping in joy and running to me to see what treat I had for him.

He was my delight. My magic boy. My unicorn fawn. My friend, running up to the garden gate so I would give him greens. Jumping joyfully. My little friend is here no longer. I am grateful for him, for the gift that he was. I am broken that he left so soon.

I only know he was a wild being who was also a friend. I wish I could have saved him.

Read more of my posts on Jennifer’s Blog

More on Stumpy is in my book I AM Witch: The Art of Becoming, which I hope to have published this year.

The Numinosity of Love

What I wish for Jyoti Singh Pandey 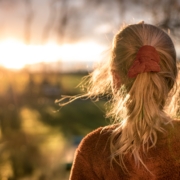 Growing into a Bigger Heart

We Are Big Beings 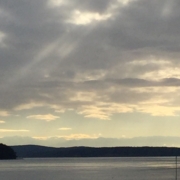 Learning to Love All of Me

My Teachers, The Trees
2 replies

I AM Witch: The Art of Becoming
Scroll to top
error: Alert: Content is protected !!